The largest reclining Buddha in Bangkok

Petr Liška
Wrote 2166 articles and follows him / her 195 travelers
(2 rating)
Religious buildings
© gigaplaces.com
Suitable for:
Excursionist
Travelers
They been there:
+1
They want there:

One of the most beautiful temples in Bangkok is undoubtedly Wat Pho with a huge reclining Buddha. In addition to the reclining Buddha, you will find a number of other pagodas, temples and various lakes – the area is really large (300 × 170 meters) and if you do not hurry, you can spend a really long time here

We started the tour at the northeastern end of the area with the biggest local attraction – the reclining Buddha. It is really a colossus and it is interesting not only for its size, but also for its beautifully decorated feet. 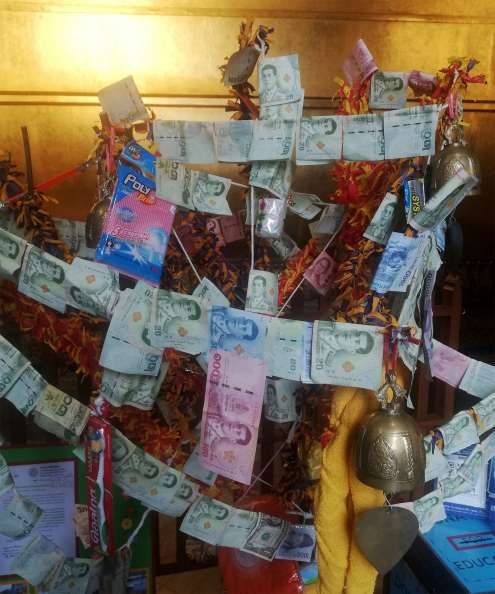 Even the gods love money

The reclining Buddha basically occupies the entire center of the building, but it can be bypassed. Behind him are various altars, where money is left, both banknotes and a bowl of crumbs can be bought (for 20 BHT), which you can also empty somewhere. The Thais thus fulfill the norm of good deeds, and the monks or the temple have something to live on

Right next to the Lager Buddha pavilion is the beautiful Phra Mondob, at the time of our visit 2/2020 it was reconstructed, so the view is only from the outside

Another dominant feature of the western part of the Wat Pho complex are the four huge, beautifully decorated paganas of Suan Misakawan

We are moving slowly to the eastern part of the complex, where there is an incredible number of different sacral buildings that are around the central temple of Phra Ubosot.

At the central temple

Apart from various temples, you will find a lot of so-called „resting“ places to calm you down and slow you down

On our second visit we were here before sunset and it had an interesting atmosphere. Even from the outside, the temple is interesting to look at. Anyone visiting Bangkok should definitely not miss Wat Pho

A tour of the Wat Bowonniwet Vihara temple

Modern travel in Thailand by train.

A trip to the aquarium in Bangkok

Bangkok is a huge metropolis full of beautiful Buddhist temples. This is the main thing you can visit here. In addition, river… continue reading