Pearl on the Danube

Marian Gabor
Wrote 77 articles and follows him / her 5 travelers
(1 rating)
Traveling Cities
© gigaplaces.com
Suitable for:
Car tourists
Digital nomads
Families with children
Families with a stroller
Seniors
Excursionist
Travelers
Holidaymakers
They been there:
+2
They want there:

Budapest, the capital of Hungary, was created by merging three separate cities: Buda, Pest and Old Buda, each with a separate history and a separate style and charm that Budapest retains to this day. One of the most beautiful cities not only in Europe but also in the world, I will try to bring you closer to this article, where I bring you a preview of my most famous „mandatory“ stops, if you decide to spend a weekend in Budapest.

One of the river islands on the Danube, located right in the city center, has been transformed by the inhabitants of Budapest into one huge park, which is definitely worth visiting and spending a few minutes in, either by walking and admiring the local flora or by visiting the historic buildings on the island. relaxing on the lawn.

One of the stops on Margitin Island, which you don't have a chance to miss, because it is located right next to the bridge of the same name crossing the Danube and it is definitely worth a visit.

The Budapest Parliament from the time when Budapest was the capital of Hungary is one of the city's biggest landmarks and is definitely worth a visit. Admission to the parliament is 12 euros, but it is worth booking in advance.

Shoes on the banks of the Danube

The shoes on the banks of the Danube symbolize almost four thousand Jews who were murdered by members of the Party of Arrow Crosses during the Second World War.

Buda Castle is also one of the city's biggest landmarks, the photo shows a view of the castle from the end of the Chain Bridge, which was the seat of the Hungarian kings. The castle was built in the 14th century, but has undergone several changes over the centuries and did not acquire its current form until the end of the 19th century. 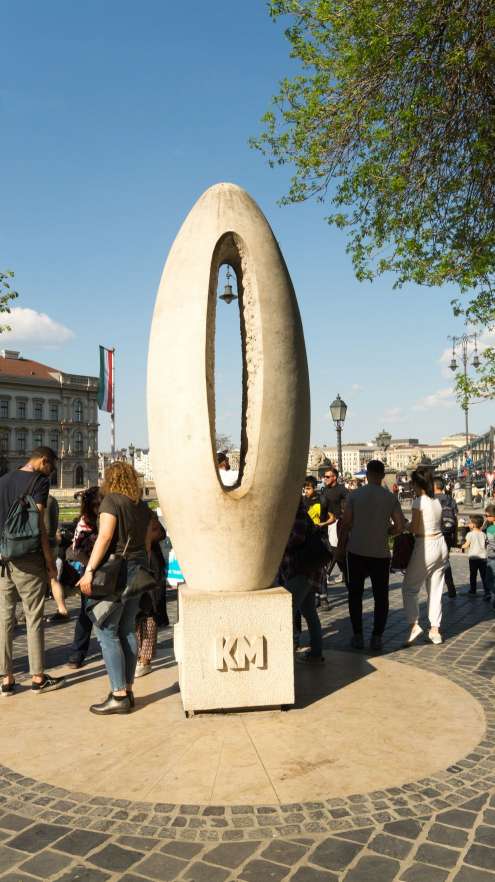 Zero kilometer is one of the attractions and most visited places in Budapest.

On the way to the castle, you have two options to use the cable car, or walk through the parks that surround the Buda Castle and make your way more pleasant, in addition, you can enjoy the views of the citadel during the trip.

Bridges on the Danube

View of the Chain Bridge, the Parliament, the historic city center and Margita Island from Budatín Castle.

View of the citadel

View from the castle on the citadel. 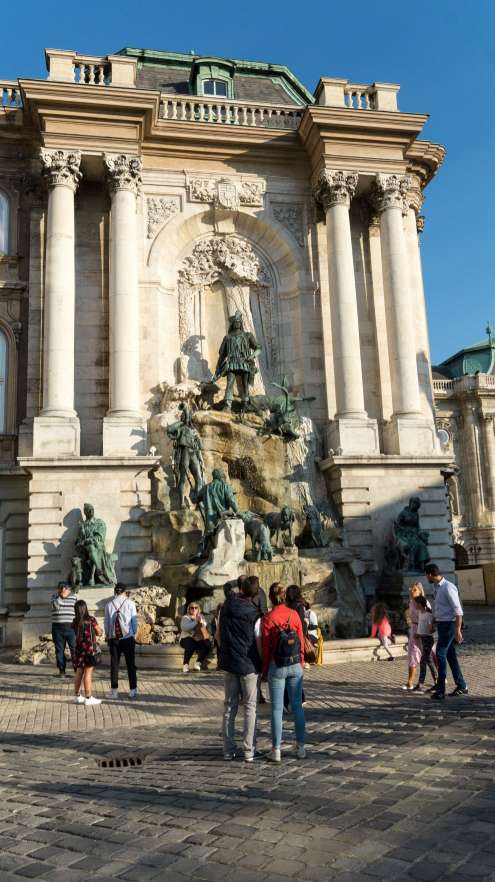 The Matthias Church is one of the biggest landmarks of Budapest, located on the Buda side of Budapest on the castle hill near the Fish Bastion. The original temple was built in the 13th century, during the Turkish occupation it was rebuilt into a mosque. After the liberation of the city from the Turks, it was rebuilt into a church in the Baroque style. It acquired its current form during the last reconstruction into a neo-Gothic cathedral between 1873 and 1896.

The Fish Bastion is one of the biggest landmarks of Budapest, which is worth a visit, especially because of the view of the historic city center together with the parliament. During the day the entrance to the bastion is paid, but it is worth going there in the evening, when the entrance fee is not paid and you can see the night city with a well-lit parliament, but it is not worth going there during sunset because it is full of tourists. 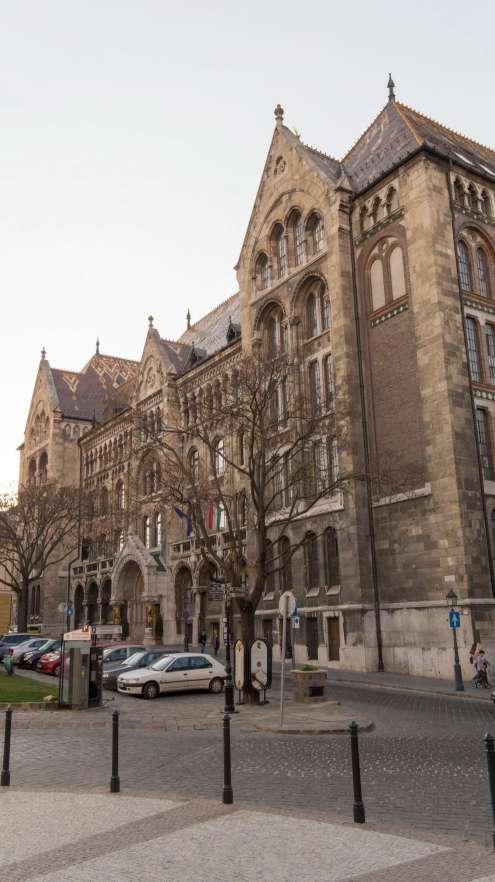 The building of the state archive, which is located at Budatín Castle 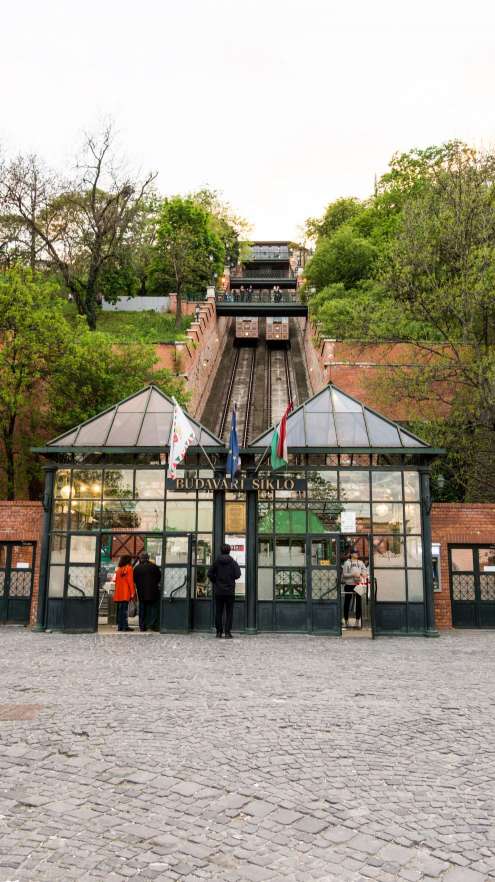 Cable car through which you can get to the castle.

Night view of the illuminated Fish Bastion together with the Church of St. Mateja.

The view of the parliament is amazing not only during the day and night.

The cable car will take you to a hill with a perfect view of the city for a few small changes.

Observation tower above the city from which there is a perfect view of the whole city. I definitely recommend visiting it in the morning when there is a minimum number of tourists.

A view of the city, which I consider one of the greenest places I have visited.

I can certainly call the main station for foreign trains Budapest Pályaútvár one of the dominants of the city.

The classic-style Szécsény Spa is one of the most beautiful landmarks in the city, located near the main park in the city center.

The park located in the city center near the Hosúk Tére monument is one of the ideal places for a lunch break and a shorter break while exploring the city. There are several monuments and attractions in the park and it is definitely worth a visit near the park there is also a zoo and Szecsény spa and in the past there was also an amusement park I see a park

One of the dominants of Budapest, Hosok Tere Square, is home to the famous monument, which depicts the most important Hungarian kings, who shaped the fate of the people not only in Hungary, but throughout Central Europe.

One of the most famous landmarks of Budapest, the Great Synagogue is located in the historic center of the city, which was used until the Second World War, when the city was inhabited by a large Jewish community.

The basilica is located in the center of the historic part of town and is definitely worth a visit, unlike the church of St. Mateja can be seen from the inside of the basilica. Nearby is, among other things, the Budapest Ferris wheel, Christmas markets are held here and, among other things, you can buy one of the best ice creams in the city, which you can stand for about half an hour.

View from the citadel

The citadel itself is located slightly at hand for most tourists, but it is worth getting there due to the magnificent views over the city. If you have a car available, I recommend going there by car in the morning because there are a large number of parking lots, which are free during the weekend, not only at the citadel but throughout the city.

A tour of the Calvary in Banská Štiavnica