Walk from Charles Square through Charles

A walk through Prague

Dominika Charvátová
Wrote 119 articles and follows him / her 11 travelers
(1 rating)
Sightseeing Cities
© gigaplaces.com
Suitable for:
Seniors
Hikers
Excursionist
They been there:
+3
They want there:

Nice walk for unconventional views and less touristy places in Prague. The beginning of the route leads from Charles Square, through Albertov, the botanical garden at Charles University and around the historic hospital building at Apolinář to the city walls to a place called Bastion with a beautiful view of Vyšehrad. The path is not completely barrier-free, because there are several steps, but you will be rewarded with an unforgettable view.

For better orientation on the route, I am adding a map with points on the route, according to which one can orient oneself and where I made stops. 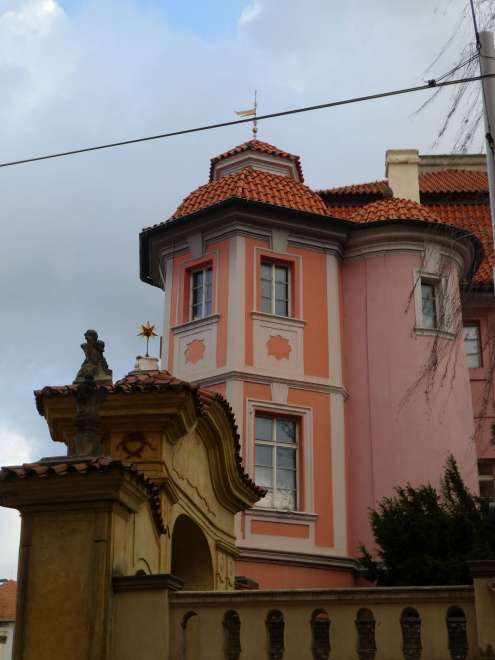 At the very end of Charles Square we find an interesting house. It is the Faust House or Mladotov Palace is originally a Gothic building from the 14th century, which was modified in the Renaissance and Baroque style. The house was built on the site of a pagan burial ground near the road connecting Prague Castle and Vyšehrad. The house was inhabited, for example, by the alchemist Master Kelly or the inventor Count Ferdinand Antonin Mladota of Solopysk. In the Romantic era, this house was associated with a mysterious legend about Faust, who signed his soul to the devil. 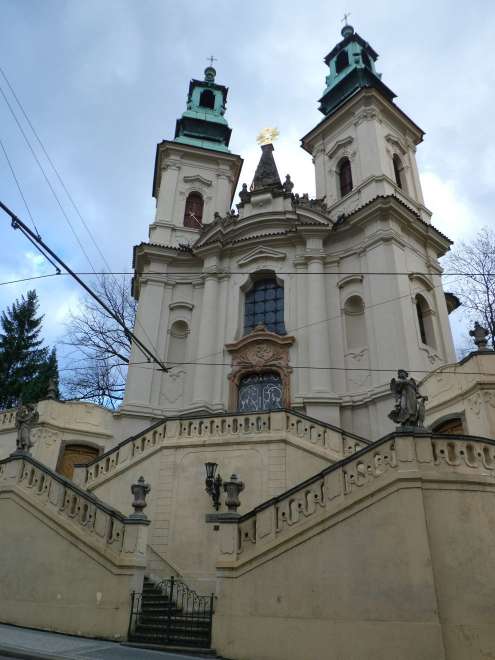 Continue along Vyšehradská Street and you can't miss the huge church of St. Jan Nepomucký Na Skalce. It is a top Baroque central building from 1730 to 1739 by Kilián Ignác Dienzenhofer. On the main church altar is a sculpture of Jan Nepomucký from 1682 by Jan Brokoff. This is a wooden model for a statue on Charles Bridge. 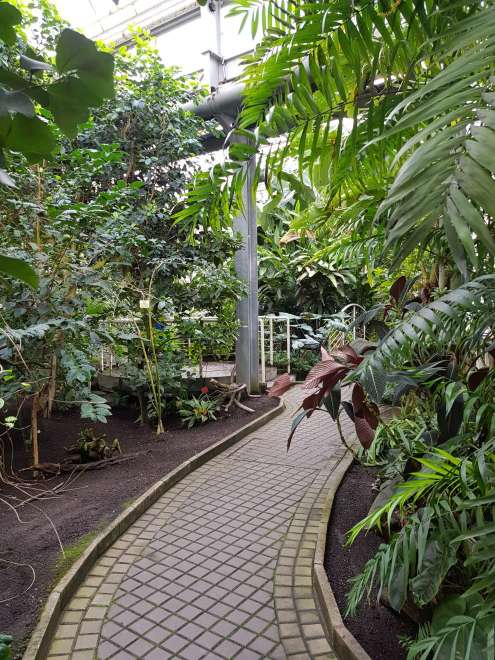 Botanical Garden at the Faculty of Charles University

On the border of Vyšehradská and Na slupi streets, there is a plant oasis in the middle of the city. It is a botanical garden at the Faculty of Charles University. Entrance to the exteriors is free, you only pay for entry to tropical greenhouses (55 CZK per adult).

The garden was founded in 1775 and has an area of 3.5 hectares. It is one of the important botanical gardens in Prague. Inside the greenhouses, a variety of tropical and steppe plants await you.

Parrots in the garden

Inside the greenhouse, several parrots are waiting for you, shouting for them the real atmosphere of a tropical forest.

The outdoor gardens, which are free of charge, are beautiful in every season. The area is relatively large and interwoven with many paths along the slopes, so even a larger number of people can be conveniently located here. In early spring you will find carpets of snowdrops, snowflakes and other first messengers of spring.

When you have enough love in the botanical garden, climb its exteriors up the slope. Upstairs, you can get out of the arena with the gate and weave through narrow streets around the faculty of Charles University. At the very top you will find a large area as if cut from Victorian England. Red bricks and turrets attract the attention of passers-by. The area of the Zemská porodnice buildings is built in the English Neo-Gothic style according to the architect Josef Hlávka between 1868 and 1875. The main entrance under the bay chapel is decorated with paintings by painters Körber and Liebscher.

Nearby is a church that gave the maternity hospital its name. The best view of all its beauty is from the opposite peak, where our steps lead further along the route. Church of St. Apolináře was built between 1362 and 1376 by Charles IV. for the chapter. In 1503 it merged with the chapter of St. Vitus and the church became a parish.

Albert Slopes - Down stairs and views

Between the church and the maternity hospital, turn into an inconspicuous alley that will take you to a distant view of Prague to Vyšehrad. You will reach the top of the stairs that lead over the Albert Slopes. 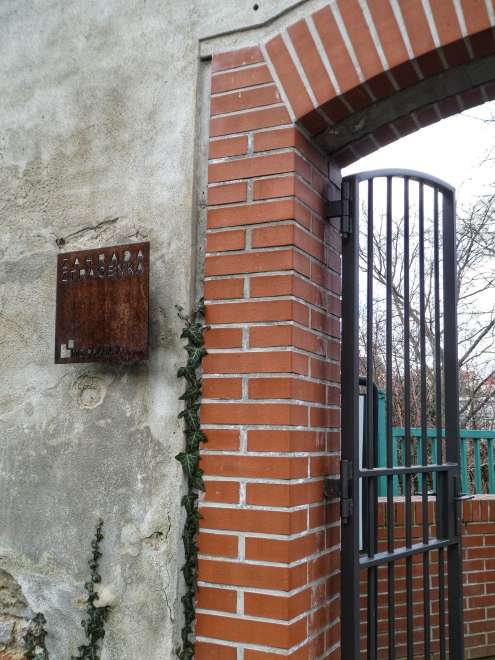 After descending the stairs from Albertovské slopes, you will walk along Studničková Street around the Institute of Forensic Medicine. At the end of the street, you will start climbing again to the next hill until you come across a gate with a Ztracenka garden sign.

In the past, the garden served as a vineyard or orchard. The newly renovated park in the style of Italian garden architecture was opened to the public in 2010. Thanks to its location, various terraces interwoven with a network of paths, complemented by a number of newly planted trees and flowers, could be created using brick walls. From several terraces you will find a magical view of the surrounding area.

From the tops of the terraces of the Ztracenky garden you can see all the way to Petřín.

From Ztracenka we continue to the city walls to the part called Bastion. It is a castle promontory with a garden and a restaurant with an exceptional view of the surroundings.

View from the Bastion

At the top of the wall view, you will also find several sculptural works of art, so you can combine a walk with a visit to the outdoor gallery. The artwork itself is a view of the panorama of Prague with Vyšehrad in the background.

View from the Bastion

At the top of the wall view, you will also find several sculptural works of art, so you can combine a walk with a visit to the outdoor gallery. The artwork itself is a view of the panorama of Prague with Vyšehrad in the background.

A walk along the fortification gallery

From the walls that lead around the Bastion you have 360 ° views in all directions. On the left in the valley lies the Nusle district, in front of you Vyšehrad and on the left the center of Prague.

View of the Nuselský bridge

From the walls there is a unique view of the dominant feature of Prague, such as the monumental Nuselský Bridge arching over the valley. 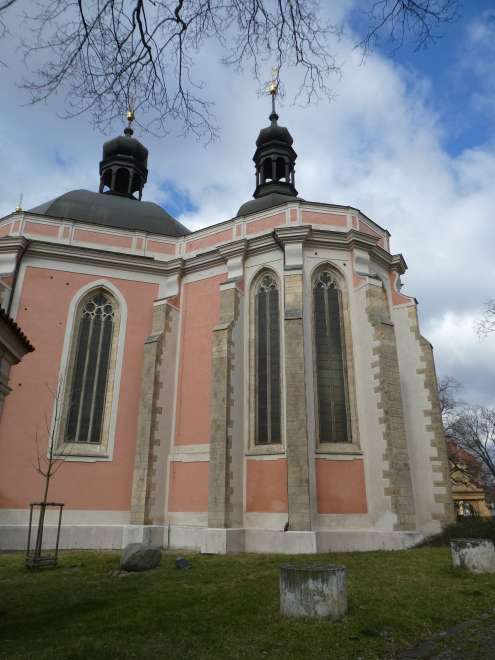 Church of the Virgin Mary and St. Charlemagne

The end of the walk is at the Church of Our Lady and St. Charlemagne. Its construction took place from 1351, it was founded as part of the canonry of Augustinian canons by Emperor Charles IV. At present, part of it serves the Czech Police Museum.

A walk around Vyšehrad

How to enjoy Prague untraditionally

A tour of the St. Agnes Monastery

The view from the Petřín lookout tower

Behind the stained glass windows to St. Vitus Cathedral