The island where James Bond “died“.

Tony Výborný
Wrote 61 articles and follows him / her 8 travelers
Traveling
Author: Tony Výborný © gigaplaces.com
Suitable for:
Travelers
They been there:
They want there:

From the port (apart from a few minor detours) there is practically the only road that stretches along the entire island. It is 18 km long and only about 2 km wide on average.

Half of the way is along the coast where sheep graze. Some are beautifully fluffy.

Others have proper dreadlocks. 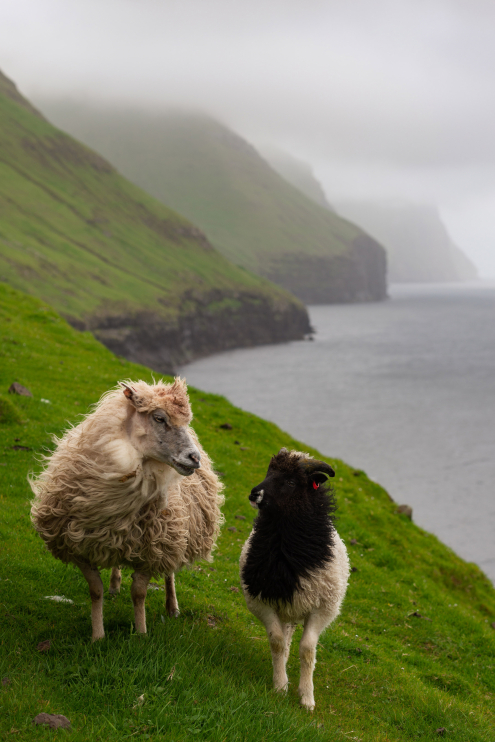 They mostly just run around on sloping grassy slopes that are wet and really slippery. Although they have hooves, otherwise they would probably often end up in the sea after falling off the cliffs.

In the northeast, the clouds parted a little and the sunbeam outlined the view of the village of Kunoy on the neighboring island of the same name.

The end of the journey along the coast

Halfway through the island, the drive along the coast ends for a while.

The second half of the journey leads through 4 narrow tunnels.

In the northern part of the island, the path ends with several switchbacks until it reaches the village of Trøllanes.

Above the village rises the peaked and highest mountain of the island – Nestindar (788 m).

From the small village of Trøllanes with only 13 inhabitants, a footpath leads to one of the most iconic lighthouses of the Faroe Islands. The path is not very difficult, it leads up a gentle hill and the biggest obstacle is sheep droppings. However, extra caution is required after rain.

The entire route leads around the beautiful mountain Borgarin (537 m), the eastern side of which is a gentle grassy slope and the western side is an almost vertical cliff leading to sea level.

The lighthouse itself is not very interesting. What makes this place amazing is its surroundings.

View of the lighthouse

A narrow footpath leads to the most beautiful view of the Kallur lighthouse with Mount Borgarin in the background. Although it doesn't look like that at first glance, in strong wind and wet weather, few people dare to walk along the footpath to the viewpoint. In good weather, looking west, you can see the Giant and the Witch rock formation.

Yes, this is the exact place where James Bond died in „No Time to Die“.

Just below the village of Trøllanes is a beautiful rocky coast.

The next stop is the village of Mikladalur, which is the largest village on the island. The village is known for several legends. There is also a waterfall and a beautiful coast with cliffs and caves. 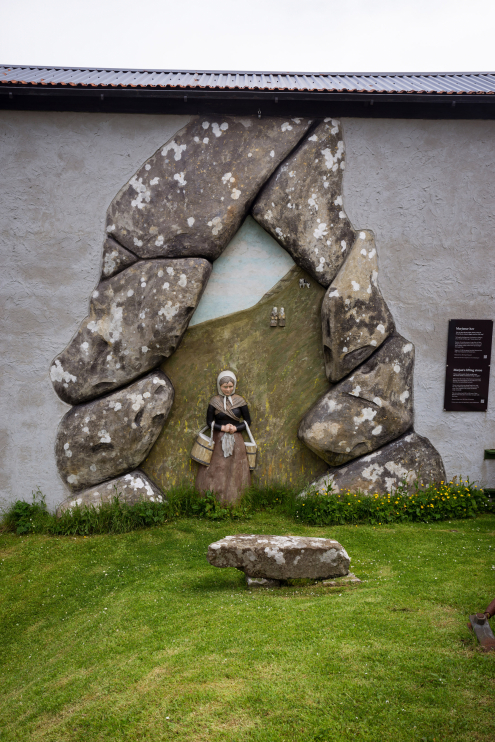 The next stop is the village of Mikladalur, which is the largest village on the island. The village is known for several legends. Marjunar Hav is a giant stone slab that weighs 287.5 kg. „Hav“ is the Faroese term for a heavy stone that people used to lift to show their strength. The legend of Marjunar Hav tells of the maidservant Marjun who became pregnant out of wedlock, which was punishable by death in the 16th century. Before her death, she held up this stone with one hand and declared that it would be her only inheritance. Many then tried in vain to lift it.

Right below the village is a famous statue of a female seal. Locals believed that seals used to be people who voluntarily sought death in the ocean. Once a year they were allowed to come ashore, strip off their skins, and dance like human beings. A young farmer from the village of Mikladalur did not want to believe the story, so one evening he went to lie in wait on the beach, where he saw a large number of seals coming ashore. There they stripped off their skins, which they then laid on the beach and danced like humans. The boy peered at a girl who had placed her skin near where he was hiding and stole the skin so that she could not go back into the sea. As the sun began to peek out in the morning, all the seals dressed back in their skins and returned to the sea. The seal girl was very upset when she couldn't find her skin, even though her scent still lingered in the air, and then the Mikladalur man appeared and held her but wouldn't give her back despite her desperate pleas. She was thus forced to leave with him to his farm, where he kept her as his wife and she bore him several children. The whole time he kept the sealskin hidden locked in the chest and he always had the key with him. One day, when he went fishing, he forgot the key at home. When he found out, he realized that he would lose his wife that day. And so it happened, and upon his return he found only abandoned children at home. When the seal girl returned back to the sea, the seal that had loved her all this time was waiting for her. A few years later, the seal woman appeared to the farmer in a dream and asked him and the villagers not to kill the seals living in the cave, because they are her family. The next day, when they went hunting, they ignored her plea and killed the seal. Then in the evening, when they were cooking their meat, a seal woman appeared there in the form of a menacing troll and cast a curse on the whole village – revenge on the men of Mikladalur, some would die at sea, others would fall from the mountain tops, until there were so many dead that if they joined their hands , will embrace the entire island of Kalsoy.