Divine mountain in the south of Bavaria

Wendelstein – is an 1838 meter high mountain in the Bavarian Alps in southern Germany. It is the highest peak in the massif and due to its location it has a very good view within a radius of several tens of kilometers.

After a few minutes' drive from the Bavarian capital Munich on the motorway towards Salzburg, the outlines of the German Alps begin to form in front of Lake Chiemsee. We turn to Bayrischzell, where our current destination is approaching after a five-hour journey from Prague.

We are greeted by the red and white transmission towers of Bayerischer Rundfunk, an unmistakable landmark for the top of Wendelstein (1838 menters)

The 1970 cable car takes you to the Wendelsteinhaus mountain restaurant (1724 meters above sea level) in seven minutes, which has been standing here since 1882–1883 and is about 100 meters below the top of Wendelstein. In the restaurant you will find simple snacks, as well as special gastronomic events.

If you would like to choose an alternative cable car, you can choose the route to the Wendelstein cog railway from Brannenburg. The first alpine railway in Germany created between 1910 and 1912. Since 1991, after modernization, the train ride has taken about 30 minutes. Alpine meadows, forests and rugged rocks of Wendelstein are an amazing experience.

From the terrace of the restaurant there is a steep view – Gacher Blick offers a huge panoramic view of almost 200 alpine peaks of the Chiemgaur Alps, through the Wilder Kaiser, Grossglockner, Zillertall Alps, Karwendel peaks to the highest mountain in Germany Zugspitze.

Climb to the top

There is a final ascent to the top, which is about 110 meters (1838 m) high with a brisk step of less than 20 minutes, when the peaks of alpine peaks begin to appear more and more. We are greeted by a new observation deck and a chapel from 1718 built by a peasant from Bayrischzell out of gratitude for finding his horses lost in the fog. Right next to us is the modern vault of the university observatory. 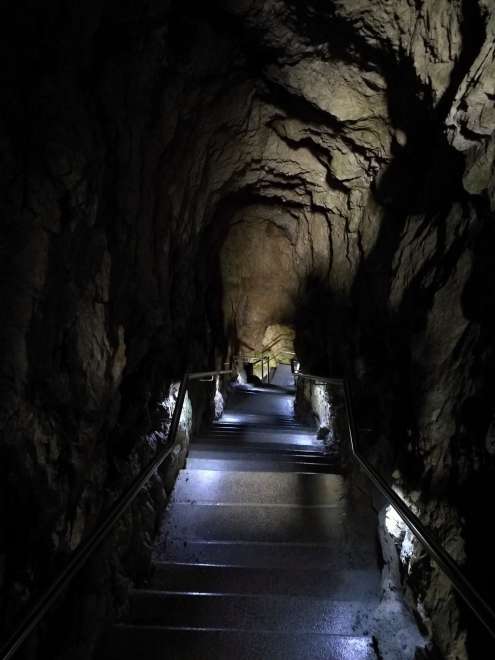 On the way back we bypass the mountain from the other side and almost at the end of less than 5 minutes from the railway station we get to the entrance to the cave. After 82 steps you will go deep and through a rock slit you will get to the natural cave entrance called cold trap, where there is still snow even in mid-summer.

Now only a few final photos and saturated with amazing views of this mountain scenery are moving on.

Author: Honza Hřídel © gigaplaces.com
Applaud the author of the article!
Share it on:

Walk to the lake below Erfurter Hütte

A ride around the Achensee

Trip to the eastern part of Karwendel

Trip to the Gerntal valley