A trip to the royal city

The town of Litoměřice is located in the Ústí nad Labem region and is one of the oldest Czech towns. It lies at the southern foot of the Bohemian Central Mountains on the right bank of the river Elbe, into which the river Ohře flows into the opposite side of the Elbe. Due to its climate, the city is one of the warmest in the Czech Republic, which is why vines have long been grown on the slopes of the Elbe. Near the town there is the hill Radobýl, which forms the adjacent landmark of the town. The historic core of the city has been a city monument reserve since 1950, which includes a total of 44 streets and nine squares. While walking through the historical part of the city, the atmosphere of ancient times, today sensitively landscaped buildings, spaces and alleys, breathes on you.

Whether you use a train, bus or car to travel to Litoměřice, the station building, bus station and car park are ideally close by. Since April, boat transport between Ústí n / L has also been in operation. and Litoměřice.

Restaurant by the railway station

An interesting stone building lies within sight of the station. When we walk to the building, we find a nice restaurant where it cooks very well. Cyclists also like to stop here and use the adjacent garden for refreshments.

Strengthened, we will go on, for a smaller sightseeing tour of Litoměřice. For example, directly along Dlouhá Street towards Mírové náměstí.

However, someone prefers to choose the path through the side streets. Each has its own charm, and one day is not enough for us to go through and examine it thoroughly.

If you go down the street Velká Dominikánská, after a while you will reach the Handmade Paper Workshop and at the same time you can admire the city walls. 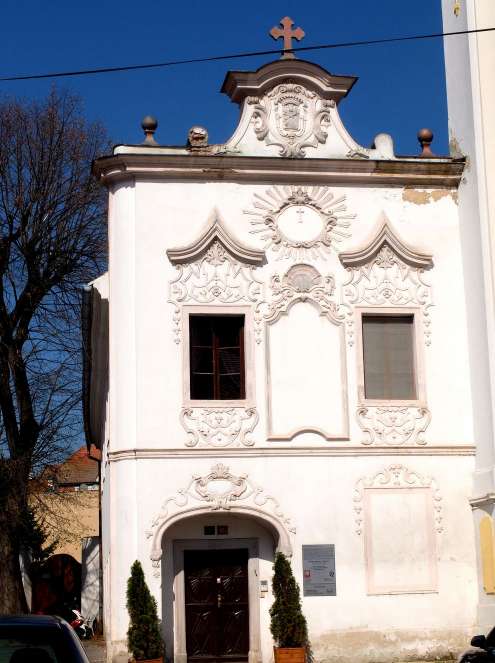 Church of St. Of St. James with the monastery

From Velká Dominikánská Street there is access either directly to Mírové náměstí or via Domikánské náměstí, where we pass the Church of St. James with the monastery, we turn to Klášterní street, from which we enter 5.května street. 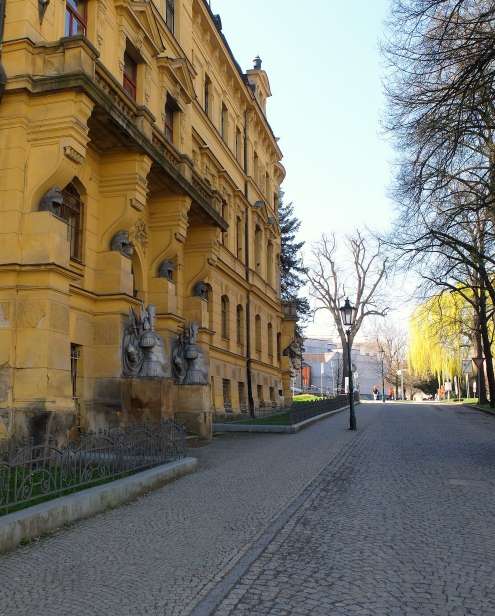 5th of May Street and Na Valech

At the entrance to the street on May 5, we are interested in several interesting buildings. We will bypass this block of buildings and get to Na Valech Street. 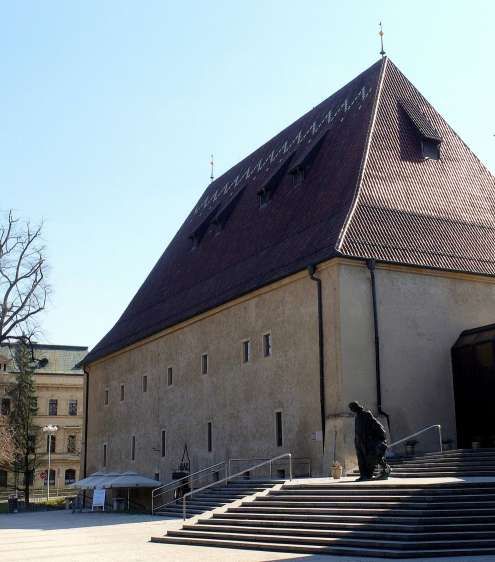 In Na Valech Street, on the left side, we can admire the distinctive castle building. Only the foundation of the western wall of the building is known from the original Gothic castle. Today, cellars and a basement with a separate entrance to the wine bar from this street are preserved and used from the historical premises.

In Na Valech Street, the new building of the Cultural and Congress Center is connected to the castle building.

As the main access to the castle, the southern entrance with the portal from the courtyard of Tyršova náměstí is restored in the spirit of the original layout. It was built in the building block south of the castle, and to this day the former premises of the burgher brewery with a malt house are located on Tyršov Square. 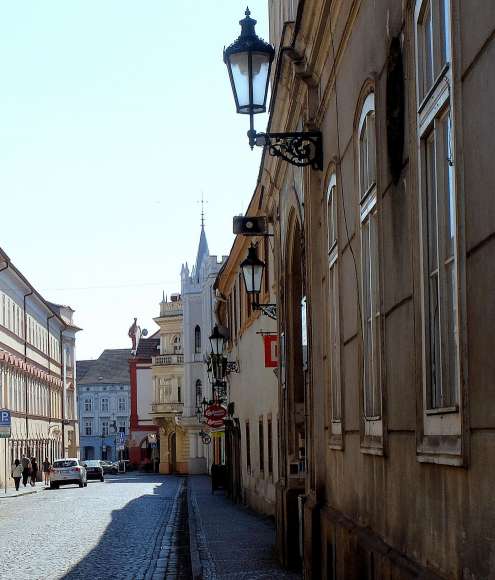 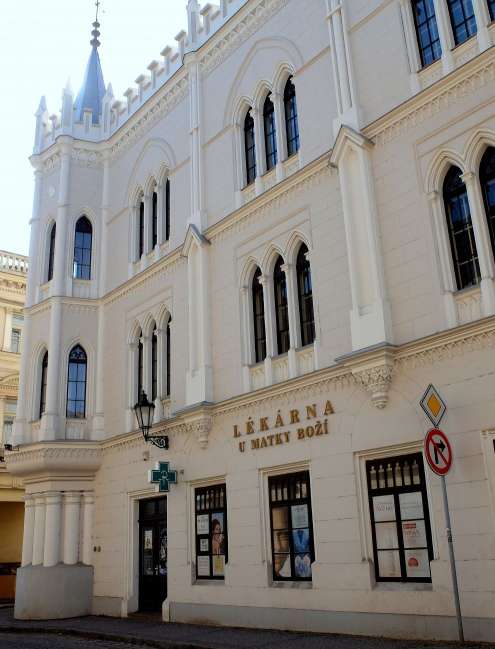 Pharmacy At The Mother Of God

And we are already entering the largest square in Litoměřice, today's Mírové náměstí, which has been the core of the city since the beginning of the 13th century. Most of the houses on the square are Gothic in core. Inside and on the facades, however, you can see manifestations of all building styles from Gothic to the 20th century.

Almost every building on the square has an interesting history and also impresses with its appearance. Probably the most famous is the building with the Kalich lookout tower, which was built in the 16th century and where the City Hall and the Information Center are located. The plague column and two fountains will not escape interest.

Another unmissable building is the Gothic town hall, first documented in 1397. At present, it houses the Regional Museum of National History with rich collections. 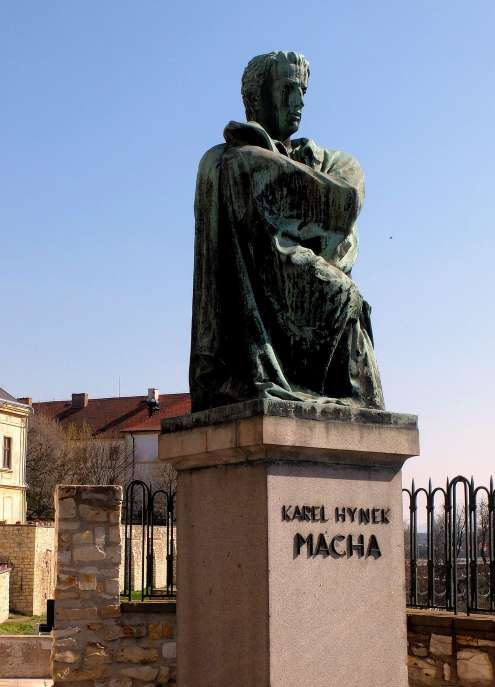 We leave the square along Máchovy Schody Street, where we pass the KHMáchy Theater. The poet Mácha is one of the most famous inhabitants of Litoměřice. To mark the 100th anniversary of the poet's death, his bust was placed in front of the KH Mácha Theater in 1936.

Views from the bust of KHMácha

From the bust of KHMácha there is a beautiful view of the José Rizal fences and the Tyrš Bridge.

To the right of the bust of KHMácha, we will meet up Mácha's Stairs, where we will have a beautiful view of the most famous Cathedral of St. Stephen in the diocese of the Litoměřice diocese. The construction also includes an open observation tower.

Below the Macha Stairs on the right, we pass a late Baroque two-storey mill on the Pokratci stream, which was built at the end of the 18th century. In the years 1996 – 1997, the whole building was renovated.

After that we turn left into Jarošova street. On the right side we pass a park, where small and large ones are attracted by a miniature map of Litoměřice with the most famous monuments and where there is also a café Coffee with steam. This place cannot be overlooked. A steam locomotive only serves as a banner here in a smaller version.

An underpass under the track leads to large green areas near the Elbe, which are decorated with several sculptures. Around the Elbe there is a cycle path and the whole area serving the inhabitants of Litoměřice for leisure activities.

The Tyrš Road Bridge is named after Professor Miroslav Tyrš and connects the towns of Lovosice and Terezín with the town of Litoměřice. To the left of the bridge is a boat dock and other recreational areas.

After the footbridge over the stream with the path around the track and the underpass, we return again to the city and to the station building, where we can close this tour.

Author: Irena Amlerová © gigaplaces.com
Applaud the author of the article!
Share it on:

Giga List: The most beautiful trips in the Bohemian Central Mountains

The Czech Central Highlands is one of the most interesting areas in the Czech Republic. Dozens of beautiful cones rise above the… continue reading