The cradle of mountaineering and the icon of the Italian Dolomites

Jan Brůžek
Wrote 2 articles
(1 rating)
Hiking Hiking circuits & Trekking
© gigaplaces.com
They been there:
They want there:
+2

In this article I will introduce you to the amazing Tre Cime or Drei Zinnen. Whether you are a climber, a lover of secured trails or mountain hikers, you should not miss this exceptional place.

Arrival at the Place

The starting point is the mountain hut Auronzo 2330 m above sea level, which can be easily reached by car on the road from Misurina. The cottage has a large parking lot and quite good facilities. It is necessary to take into account the toll that is paid on the way back.

We start the first day with Italian espresso at the Auronzo hut. I must say that he can prepare a coffee perfectly and the price of 1.2EURO is cheaper than at home, but don't take it :). We continue the undemanding circuit around Tre Cime. The route is not challenging, but it is spectacular in landscape. His eyes are still turning to the north walls, and not and not tearing off. About halfway is Locateli's cottage, where you can relax and gain strength. If you are a fan of ferrat so not far from the cottage is a secured path to Toblinger Knoten 2617 m. Ferrata is not long, but it is honest C. where there are several difficult and powerful passages. It is important not to confuse the ferrata itself and the descent path :).

In the footsteps of the war

The last place that you should definitely not miss at Tre Cime is Paternkofel 2744 m above sea level. During the ascent you will see a lot of remains of St. Wars such as tunnels and artillery sites excavated in rock. The ferrata itself is not difficult, but in the off-season there may still be a lot of snow, which will hide the mooring ropes. At the top you will have a unique view of the entire Tre Cime area.

The beginning of Ferrata

On the right is Paternkofel, on the left Tre Cime

In the background Toblinger Koten

Marmots are here at home :)

Trail to the cottage

there may still be a lot of snow in early June 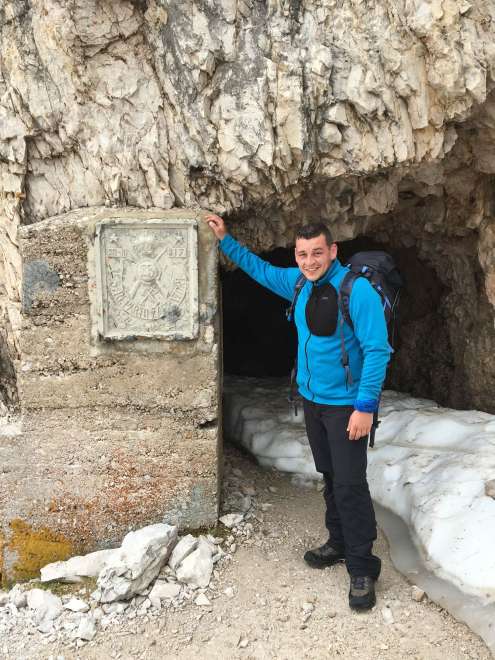 The beginning of the ferrata on Paternkofel

Hooray for the tunnel